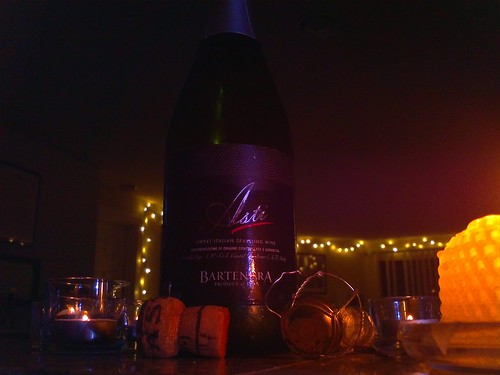 One year ago today, I decided to participate in Project 365. Project 365 is a photography project where participants take one photo every day for 365 days. It’s self-directed, so participants can set their own standards, use whatever tools they want, whether it’s taking photos with a smartphone or DSLR or even film camera, and post their photos to whatever site they wish. People participate for all sorts of reasons, such as having a photographic record of the year or honing their skills as a photographer. In retrospect, after my failure to keep up with the Everyday Matters Weekly Drawing Challenge, I was looking for a creative outlet that was a bit easier to accomplish, but that still held me to a regular schedule. I decided to participate in Project 365 on the spur-of-the-moment at the end of December 2012, after seeing it mentioned on social media. I thought, “Oh, this sounds cool. I think I can do this.”

I’m happy to report that I have accomplished my goal of taking one photograph a day for 365 days. You can see all 365 photos in this Flickr gallery.

I started using Instagram in April 2012, right when the Android app became available. Looking back on it, my experience and photographic experiments with Instagram in 2012 led me to feel that I could take a photo a day for a year and keep myself engaged and interested for the duration. In the eight months of 2012 that I used Instagram, I was determined not to use it only for taking pictures of food. I tried to compose interesting shots, looked for unusual or out-of-the-ordinary subjects, and generally tried to take nice and interesting pictures. That experience, I think, prepared me well for Project 365.

I didn’t do much formal preparation for Project 365. I did a cursory Google search to learn more about parameters and restrictions. Finding that there were really no restrictions that the participant doesn’t impose on themselves, I then looked for tips. I found one blog post that I took to heart, especially the suggestion to post early and often.

With Project 365, I wanted to make sure that whatever picture I posted, I composed with some measure of intention to create an interesting picture. I didn’t want to just take pictures, I wanted to take interesting pictures and try to improve as a photographer. I use this term extremely loosely because I’ve never considered myself a photographer, though I’ve long tried to do interesting things with pictures. For instance, when film cameras were still a thing, I would buy rolls of black and white film and try to take interesting black and white pictures. Here’s a black and white photo I took whilst I was still at university many years ago in St Andrews, Scotland:

Food is one of the most readily available subjects to photograph, since we all need to eat everyday. If I took a photo of food, I still wanted to make sure that picture was as good, quality-wise, as I could get whilst using a smartphone.

If I was sick or lacked inspiration, I still tried to take an interesting photograph.

Many of my photographs have a minimalist style, with as few extraneous elements in the shot as possible. Minimalism was a focus of a good chunk of my photographs because I admire this art style and I follow several great minimalist photographers on Instagram. Close-ups and abstraction, combined with minimalism, also featured prominently in my project. I tried to stay away from clouds and sky photos towards the latter half of the year, but clear or cloudy skies combined with buildings made for great minimalist photography for my project.

Another subject I enjoyed was taking photos of architecture. I saw buildings I passed everyday in a new way when trying to take an interesting picture. When I traveled, I took note of interesting structures and tried to incorporate them whenever possible.

With a project like this, it’s difficult not to take pictures of everyday items. I still tried to make it interesting and tried to do a good job of composing shots. Along with food, still life is another relatively easy subject, since ordinary objects are all around us.

There were several occasions where I had fun with action figures. This was a fun way to knock out a photo for the day when there was nothing else interesting that I thought I could photograph. I also did a mini photo series of my Samus Aran Phazon Suit Statue, all lit up.

Special events, occasions, or outings proved great subjects for my Project 365: getting my first US passport, being surprised with a weekend away on the Olympic Peninsula, riding the rollercoasters at Hersheypark, starting to wear my first pair of raw denim jeans, when subtext became maintext on Once Upon a Time, going to the Macklemore and Ryan Lewis show, getting dressed up for my company holiday party or attending someone’s wedding or birthday party, seeing the Sandman exhibit at the Cartoon Art Museum.

Here’s a slideshow of all the photos:

Thank you to everyone who kept up with the project, encouraged me, looked at my pictures, ‘liked’ them, commented, and made suggestions.

I forgot to add a bit about my tools and methodology. If I remember correctly, I used a smartphone to take all the photos. Until June 2013, I was using an LG G2x Android phone and after that, I used a Samsung Galaxy S4 Android phone. For the most part, Project 365 photos were initially posted on my Instagram feed, cross-posted to my Flickr page, which is my main online photo storage place, and also cross-posted to Twitter and to Tumblr. I selectively cross-posted photos to Facebook using the Instagram app. All of the Flickr and Tumblr cross-posting was done automagically for me through the use of IFTTT. Every few days or weeks, I would put the photos that were cross-posted to Flickr into a gallery. I sometimes edited my photos, and to do this I used the built-in Instagram editing tools, the Pixlr Express app from Autodesk, and/or the Photo Grid app.

← Speaking at PAX 2013
Things That Have Been Keeping Me Busy →