Tropes vs. Women on the Internet: Having Opinions

by Brinstar on 17 June 2012 in Culture, Film, Sex and Gender, Social Issues 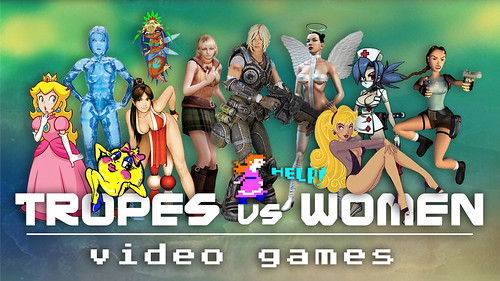 One of the big pieces of news over the past few weeks has been the organized harassment campaign (trigger warning) against Anita Sarkeesian of Feminist Frequency. What she did wrong, according to the harassers, was to dare to put up a Kickstarter project to raise funds to create a series of web videos examining common stereotypcial female characters in videogames. She hasn’t even shot the videos yet, but the mere idea of such a thing has sent internet misogynists into a frenzy of death and rape threats against Anita. I pledged money to Anita’s Kickstarter campaign a month ago, before it had met its initial goal of $6 000, before 4chan found out about it. Even then, she was getting threats, harassment, and all the typical awful treatment that she and other women receive for the nerve of having opinions on the internet. Again, this isn’t some random freak occurrence of internet harassment and it isn’t uncommon. Misogynistic online abuse has become normalized and acceptable to a lot of people, unfortunately.

Ironically, the misogynistic harassment campaign only brought more awareness about the Tropes Vs. Women in Video Games project. People showed their support for the project and for Anita’s stand against online harassment by pledging more money. 6967 backers pledged a massive $158 917, which is 2 648% over the initial goal of $6 000.

I’m happy that the Tropes vs. Women in Video Games project raised so much money, garnered so much support, and kept people aware of the abuse, misogyny, and harassment that is so commonly hurled at women who express their opinions on the internet. This vile harassment campaign underscores how badly critique is needed in videogames  as a mass medium, given the completely over-the-top and violently extreme reaction of people who feel that any criticism of videogames, particularly by a woman, is a bad thing. It also shows how much change is needed, both in online culture and in videogame culture.