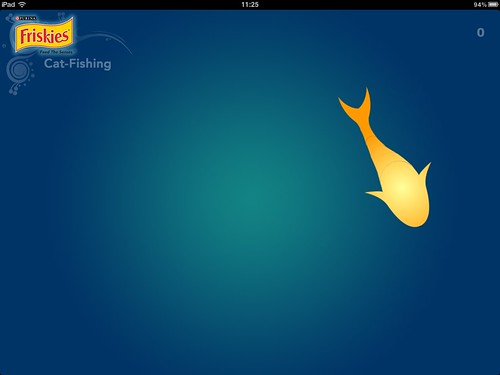 This is going to be an unusual review for a couple of reasons. The first is that I am not the target market for this game, and the second is that because I am not part of that target market, I am writing about this based upon observation of the entity that actually played this game.

Last weekend, I was out of town and staying with family at their two-cat household. I brought my iPad for entertainment and to stay somewhat connected. I was recovering from a migraine, so whilst the others were out hiking in the hills near Salt Lake City, Utah, I stayed at home with the cats. One can only do so much lying around, and the cats were hanging around me, so I decided to download an iPad game specifically created for cats. I had read articles on social media blogs and tech blogs about how babies and pets enjoy certain iPad apps, so I figured this could be entertaining for me (and I hoped for the cats).

I downloaded Cat Fishing, which I had read about on Tecca . Cat Fishing is associated with Friskies brand cat treats. I’m not sure why they created an iPad game for cats, but I suspect it is because they saw a lot of videos on the internet of cats playing with various apps on the iPad and they figured this could be good for brand awareness and engagement.

When the cat starts Cat Fishing, its presented with a blue field (water) with a lone fish swimming around slowly. The object of the game is to ‘catch’ the fish by touching it. When the cat touches the fish, it dives and the cat is awarded a point. Another faster fish surfaces shortly afterwards, and the cycle repeats. When the cat catches 8 fish, the cat is the winner and the game ends. The cat can start over if it is astute enough to touch the big red “Start game” button on the screen. Otherwise, the human can do this if the cat looks like it is still interested. There is nothing more to the game than this. I don’t think the cat can actually ‘lose’.

I launched Cat Fishing and placed my iPad on the floor. After starting the game, I got the attention of the two cats, Bruce and Minnie. Bruce is a young, active black cat with a reputation for being an annoyance in general (jumping on you when you’re sleeping, etc.) and to Minnie in particular. Minnie is an older, gentle brownish/grey cat who has little patience for youth. Bruce took a look at the fish swimming around on the screen, batted at it and ‘caught’ a fish, but he quickly lost interest. Minnie, however, really enjoyed it. She completed a couple of games before I took away my iPad. She found the game very engaging and she was pouncing all over trying to get at the fish. At times she would even paw at the edge of the iPad, thinking that the fish might have appeared underneath the device.

Friskies has a couple of other games for cats for iPad, but I didn’t have Minnie and Bruce try them out.

Transcript: An iPad lays on a dark wooden floor and a grey-brown cat plays Cat Fishing. Humans (off-screen) encourage the cat to play with the fish swimming around on the iPad screen. When the cat sees a fish on the screen, she pounces on it. The fish disappears, replaced by a faster fish, and the cat repeats the process. One of the humans says to Minnie that she is a gamer now and has joined the ranks of the other gamers in the family.

So I think the verdict is that cats may or may not enjoy this game, depending on their personality. If you have an iPad, a cat, and you’re bored, you might want to see if your cat will enjoy it.