by Brinstar on 16 June 2010 in Art and Design, Virtual Worlds

A few months ago, I tweeted about getting a sweet Alien (xenomorph) costume in PlayStation Home. The costume was released to promote the Aliens vs. Predator game, and was available for a limited time only. I’m a big fan of the Alien films, and even though I don’t spend too much time in Home, I had to get this costume. Yes, I actually bought it. I didn’t bother buying the Predator costume, however I did buy some decorative pieces for my personal space. The costumes seemed to be fairly popular with the Home community, and they even organised an Aliens vs. Predator dance off in Home. Unfortunately, I missed it due to time zone differences.

Anyway, I finally figured out how to take screen shots in PlayStation Home. I have no idea how long the ability to take screen shots has been in place, but better late than never, I guess. Here are some pictures of my female avatar wearing her xenomorph costume in the Harbour Studio personal space: 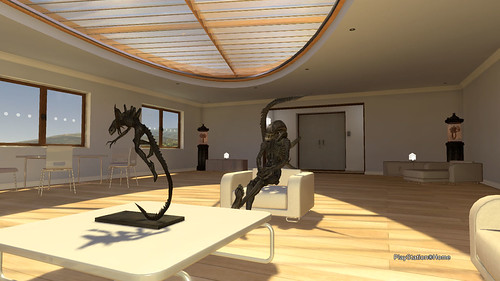 This first one is a shot of her sitting in an arm chair, with the entrance to the studio flat in the background. I decorated the two far corners with stasis tanks that each have one Facehugger. That bit of decoration was $0.49, I believe, and you can create as many as you want for your personal space. On the coffee table is a 12-inch leaping Alien model. 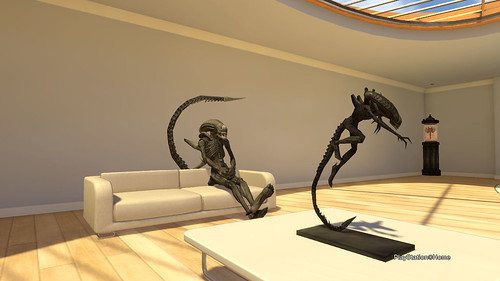 Here she’s sitting in the loveseat, enjoying the Alien model on the coffee table. There’s another stasis tank holding a Facehugger the other corner of the room. 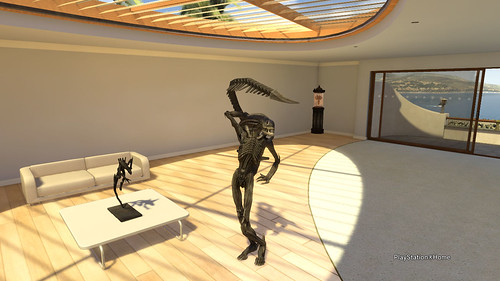 Here I have my avatar striking a pose. Even in outfits like this, PlayStation Home avatars can perform emotes. It’s pretty awesome to see a xenomorph dancing. 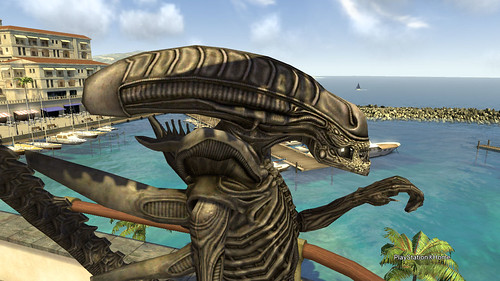 Here’s a shot so you can see the details of the xenomorph costume up close. She’s kind of bored, so she’s looking at her nails. One of the small drawbacks to this costume is that the tail never moves. It’s always curving up above her head. 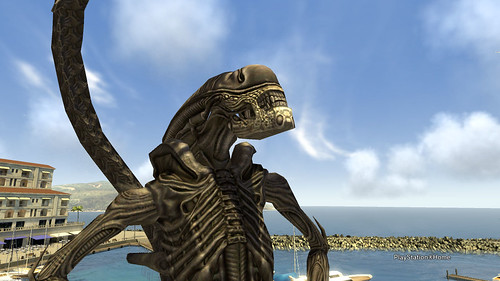 But she does love that sea air and sunshine! Ahhh!

Coming soon, I have a couple more photo-heavy posts about Home, including one of my favourite PlayStation Home spaces, the SingStar Rooms.

3 comments for “Xenomorph at Home”