by Brinstar on 7 June 2010 in Art and Design, Business and Industry, Sex and Gender, Studies and Academia

Liu’s $10,000 scholarship award will to be applied toward tuition and other educational expenses at the Art Center College of Design in Pasadena and comes with an optional paid internship of up to 10 weeks at SOE’s headquarters in San Diego, working on one of the company’s hit titles.

I was given the opportunity to interview Liu about the scholarship, her goals, and about gender and games.

Could you tell us a little about yourself? Where are you from, and what’s your background?

My name is Sylvia Liu and I’m from Milpitas, CA. I studied at Laguna College of Art and Design in Laguna Beach, CA in the Game Art major which is a really great school where I learned pretty much everything I know about art now. I’ve recently made the decision to go to Art Center College of Design in Pasadena, CA for the Entertainment Design program. Also, during this summer I’m going to be taking three classes at Concept Design Academy in Pasadena, CA where I’ve taken many amazing workshops such as Kekai Kotaki’s Digital Illustration workshop. So, this summer is going to be really fun, especially with the SOE internship.

During your internship with SOE, what do you hope to learn?

I hope to participate and learn more about the process that Sony Online Entertainment goes through for creating appealing video games.

Gaining the real life experience of what the entertainment industry is looking for is valuable to me. I also hope to excel as a concept artist, and learn how to communicate my ideas so that they are visually compelling and easily understood by others.

What do you hope to do after you graduate and why?

I hope to go into the Entertainment industry and work as a Concept Artist to create visual development for movies, animations, video games, etc. It has always been my passion to design new visual ideas and tell stories through my artwork for others to enjoy. 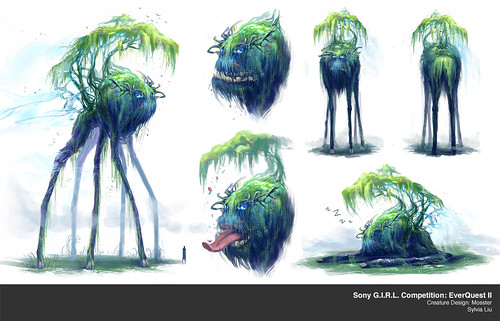 Could you talk about your creative process for your art submission for the GIRL Scholarship?

I usually start out my design process by sketching abstract thumbnails and looking for interesting shapes that are appealing at first glance.

From there, I pull things that I like and build on it. I knew that I wanted to do a creature because Everquest II has many interesting creatures as bosses. Everquest II is also a fantasy game so I made sure that my environment and creature were more organic and unique. I went with a forest because its familiar yet there are so many possibilities to making it something people haven’t seen before. My Mosster, which is my creature, inhabits the forest so I made sure that you could instantly tell it belonged in its environment. I also created my designs so they were fun and had a story to them so the player would be more interested in it.

Are there any games that you feel have particularly good concept art? If so, which games, and why do you think the concept art to those games stands above the rest?

If I could go back in the past and work on any games, I would work on Final Fantasy X because I love the concept art –all the costumes, vehicles and creature designs are so unique looking! I also feel that my personal style is very similar to that type of art so I think I’d have so much fun working on it.

Yes, I look up to so many artists that I learn from and incorporate into my work. Some of my favorites are Khang Le and Veronique Meignaud. Khang Le is one of the best concept artists in my opinion because he’s very versatile in his designing and has such a fun, unique style. I really love Veronique’s work because of her use of colors and brushes. Her designs are also really interesting and her illustrations are beautiful. Both of these artists have taught me how to look at everything in a different way and see many sides to one thing—which, as a designer, it’s important to come up with different solutions for one problem.

According to a 2007 survey by Game Developer Magazine, women account for only about 20 percent of people working in the videogame industry. Do you have any thoughts on the gender disparity in games industry workers?

I think the game industry is still a pretty new industry and over the past few years it has become more and more popular.  I think it’s just taking more time for women to break into it, although I’ve already seen amazing female individuals working in video games.  I believe that more and more women will be joining the industry and play a large and important role in the development of games in the near future.

Yes, I think it’s very important to have diversity in any kind of industry because every culture, race, gender, etc. has a unique view and opinion. The more variety you have, the more people that you can reach with your product. Also, in games, there’s so much potential for creating new worlds and with a mix of different cultures it will make games much more interesting. People from other places can also experience new cultures through their game which is a valuable and fun opportunity to have.

Maybe making some games with females as the main character!  Whenever my character is a big muscular guy, there’s no way I can get into it because that’s just not me—but I know some female gamers who don’t mind that. There are definitely more and more women getting into the industry so I just think over time the percentage will become equal.

Many gaming communities are populated mostly by men. Have you ever experienced sexism in a gaming environment? If so, how did you deal with it?

There have been many times where I was never expected to do as well as I have in my major, but I’ve never experienced any really negative sexism. I actually like that some people make assumptions about me because it gives me more motivation to do my best, and seeing people change their views is nice.

Thank you for your time, Sylvia, and best of luck with your studies and with the internship!

[This entry was cross-posted at The Border House.]