A Few Quick Thoughts on the Aion Beta

Something to note when I play RPGs or MMORPGs, is that I generally know exactly what I want to play before I actually play the game. In Guild Wars, my first character was a Necromancer. Before I played World of Warcraft, I knew that I wanted to play a Warlock. Before I started Lord of the Rings Online, I knew I wanted to play a Lore-Master. When I briefly played in the Hellgate: London beta, I was a Cabalist (Summoner). If you’re familiar with any of these games, you’ve noticed that I prefer to play magic-users that can control pets or minions (though having said that, I no longer use my Guild Wars character as a minion master). So, for two years, I’ve known that I want to play a Mage (Spiritmaster) in Aion.

This is my Asmodian Mage: 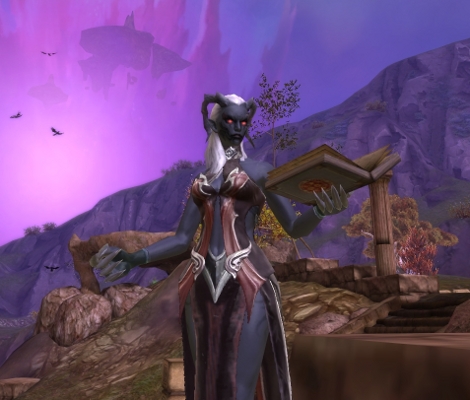 There were several things I was trying to accomplish in character creation. Firstly, I wanted my character to look as far-removed from human as possible. Secondly, I wanted her to appear powerful, indimidating, and sinister. Thirdly, Aion is probably as close as I can possibly get to playing a flying character that kind of looks like a gargoyle from the Disney television series. :-P 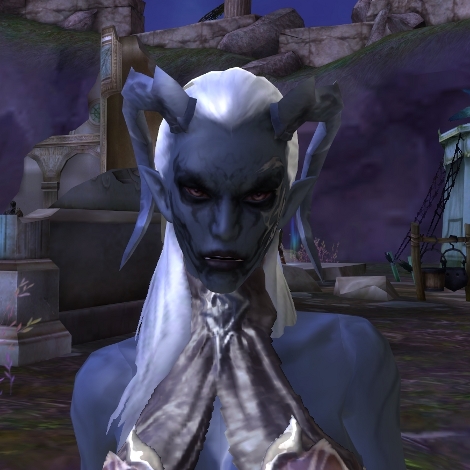 Most of the face options look fairly human, but you can use the sliders to tweak almost everything. I made her eyes a little narrow, and angled them upward at the corners a bit. I made her ears pointy, too. This is the only hairstyle with horns, and I’m so glad that they actually look cool. The dark facial markings are the only option of that kind. There are other tattoo options besides the one one I chose (the white pattern on the right side of her face), but I thought this choice best captured what I wanted from the appearance of this character. I wanted to emphasise the more feral features of the Asmodians for my character. I put the sliders all the way to maximum for her hands and feet so that her claws were more prominent. I gave her fairly muscular arms because I wanted her to look powerful. I also gave her the maximum height to make her look more intimidating.

There is one thing that I really, REALLY dislike about the appearance of the female Asmodians. Their feet. Asmodians don’t wear shoes because they have these big fucking claws on their feet. This is cool. The females don’t wear shoes either. Because: really big claws. So, naturally you would think that their heels look just like the males — a flat fleshy pad on the bottom of their foot. But no. They have a bony protrusion there that looks like the pointy heel of a high-heeled shoe. They have HIGH HEELED CLAWS: 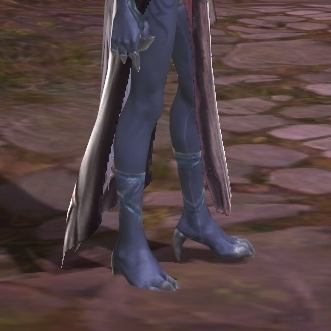 Not so cool. I mean, seriously. WHY. Let me answer my own rhetorical question: because the only way that the female of a species can appear feminine according to human gender norms is to wear high heeled shoes. Even when they aren’t wearing shoes. It’s really difficult to take my character seriously when she’s sporting those high-heeled claws. This also ruins the whole Disney’s Gargoyles look I was going for. :-( This is a minor point, though, and doesn’t at all affect game play.

Unfortunately, I didn’t get far enough along to get her wings, not because the game isn’t good, but because I wasn’t feeling well. I think Aion shows a lot of promise, and I’m planning on getting it at launch. Whether I’ll stick around for the long haul, I’m not sure. I haven’t played enough to make a decision about that.

21 comments for “A Few Quick Thoughts on the Aion Beta”