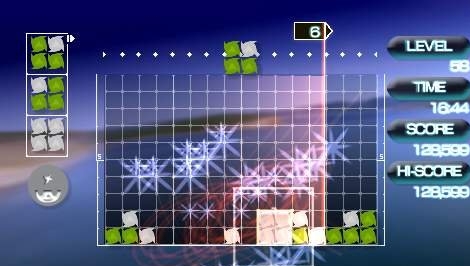 Recently I've been playing the hell out of the Lumines II demo that came pre-installed on my Japanese PSP.  The object of the game is to match the colours of the falling blocks to each other so they form four blocks. A line passes horizontally across the grid and makes all matched blocks disappear. The music changes depending on what you do in the game.

Like most demos, the Lumines II demo is not exactly full-featured. This demo consists of just one stage, pictured above. In the demo version "Level 58" is labeled "Stage 1-1". Since I didn't have the slow progression of going from levels 1 – 57, I of course find the demo pretty freaking hard, but a lot of fun. It's been so much fun that I've been playing the same one stage over and over for many days. After watching the demo video, which one can view if you don't start the game immediately, I discovered a few things I'd been doing "wrong" previously. Now I'm getting higher scores. Fun!

Because I've been playing it so much, I decided to just buy the game already. Thanks to oliemoon, I found it at Newegg for $9.99 with free shipping. I paid a couple bucks extra to have it arrive on Friday, because I want to have it in hand before my holiday next week. I will probably be playing Lumines II on the airplane(s) until the battery on my PSP dies. Unfortunately, the main leg of my journey is long (11 hours, 36 minutes, says my flight itinerary), so the battery will not last for the entire trip. Anyway, I'm looking forward to its arrival in the post (and of course to my holiday).

ETA – 20 May 2009: oliemoon reminded me that she had installed the Lumines II demo on the PSP Memory Stick before she sent it to me. So I stand corrected.

← Tumblr
Skype on the PSP →