by Brinstar on 12 October 2008 in Food and Drink, Portable

In a previous entry, I said that I wouldn’t post more Cooking Guide experiments, but you know what? I’m going back on that statement. This DS game is incredibly useful and practical, and it deserves more attention. I enjoy using the DS game more than I would a paper cook book because it’s interactive. I also get cool achievement stamps every time I cook a dish. I have created a Food and Drink category, so you know this is serious business!

Last night I made Kartoffelgratin, a German dish from Cooking Guide. The game describes it as “a potato gratin with cheese and a creamy sauce”.

Keep in mind that I have the European version of Cooking Guide: Can’t Decide What to Eat?. The North American version is being released in late November with a new title, Personal Trainer: Cooking. Having an imported version of this title does mean that I have to deal with differences, such as measurements in the game being in metric rather than Imperial. Having lived in Britain for six years and being a fan of science, I’m not averse to the metric system. Most of my cooking tools, except for the stove and oven, do actually display metric measures. I’m only having to consult the internet to convert cooking temperatures (I’m not good enough to do it in my head!), so that’s not too bad.

These regional differences extend to a few ingredients. One of the things that I discovered in making Kartoffelgratin is that the recipe calls for double cream, and double cream does not exist in the United States natively. I hear the Americans asking, “What is double cream?” Ochef says:

Double cream is the name in Britain for a very rich cream — containing 48% butterfat. Whipping cream in this country, by contrast, contains
between 30% and 40% butterfat. Single cream in Britain is comparable to
American half and half (and may also be called pouring cream), with
between 10% and 12% fat.

The same website advises that I can make a higher fat cream on my own, but I decided not to go through that much effort, and instead used heavy cream. I think the dish turned out well, despite it being less rich than called for in the recipe: 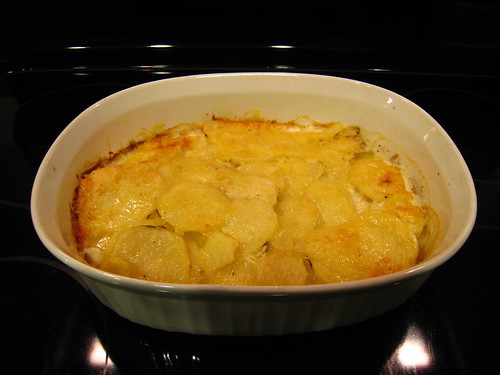 The first time I made this dish, I made it “by the book” (apart from using heavy cream) so that I had a baseline standard for comparison. I am fine-tuning this recipe to better suit oliemoon’s tastes,
because she really likes this dish. Last night’s effort is actually the second time I made Kartoffelgratin. In my second effort, I increased the cheese content, increased the cream-to-milk ratio in favour of cream, and reduced the amount of pepper. It tasted good, and it was filling, but I think there are a few more tweaks I can make before it will be ready for oliemoon consumption.