The new Guild Wars Skill (and Item) Unlock Packs are on sale for 50% off until 31st December. The Skill Unlock Packs provide players the following benefits:

This is great because I don’t have to spend time playing on other Professions so that I can have access to skills that I would like my Heroes to have. I have loads and loads of skills for Necromancers and Mesmers, but not so much for the others. Of course, if I want to have any of the unlocked skills in my characters’ arsenal, I will still have to pay one platinum to a Skill Trainer for each skill. I will also need to capture any Elite skill that I would like to use myself. 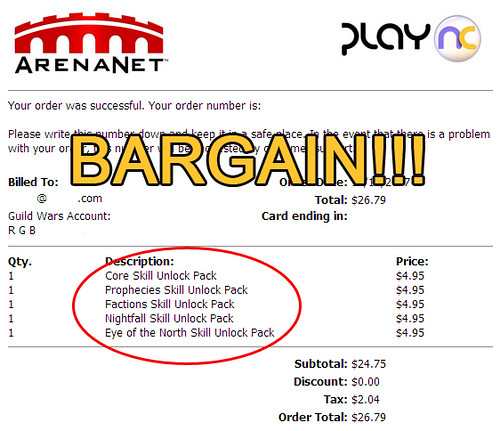 Also, Guild Wars merchandise is now available. Unfortunately, they do not sell the t-shirts women’s sizes. I snagged the shirts (with the Charr and the other one with Nika, Melonni, and Eve) in size Small before they ran out, as they tend to do.

NCsoft Europe sells Profession shirts in women’s sizes, but I don’t play an Elementalist, Ranger, or Monk. The Guild Wars hoodies are nice, but they’re so expensive, and with the Dollar so week against the Pound, there is no way I am going to spend nearly $100 for one.

I keep posting about stuff to buy, but we are coming up on that time of year again.